To Fly a Mockingbird - From Taiwan to Texas 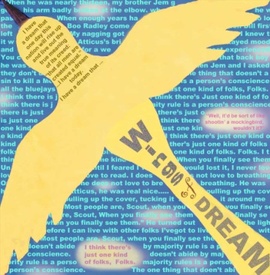 To Kill a Mockingbird, a Pulitzer Prize-winning novel by Harper Lee, was published in 1960. The book addresses the concern of racial prejudice and social justice and enlightens the message about moral tolerance and dignified courage. The film that followed in 1962 won several Oscars. The book has been translated into more than forty languages. The book and the movie (æ¢…å´—åŸŽæ•…äº‹) were introduced to Taiwan in the 1960s and gained a very high recognition.

Martin Luther King, Jr., gave his "I Have a Dream" speech in 1963. Delivery of the speech is not only a defining moment of the American Civil Rights Movement but also the expression of a vision deeply rooted in the American dream that is shared by all immigrants to this country.

The book, along with King's speech, inspired Mrs Huang, a Taiwanese American artist from Houston to create the project, To Fly a Mockingbird-From Taiwan to Texas. This endeavor is part of The Big Read, an initiative of the National Endowment for the Arts in partnership with the Museum and Library Services and Arts Midwest.

The project, part of Big Read Texas 2009 is funded by The Taiwanese Heritage Society of Houston (THSH), in partnership with the Harris County Public Library, Bellaire City Library and the Barbara Bush Library Friends.