​Since 2009 THSH has collaborated with city of Houston's office of immigrant community, office of immigrant and refugee community to celebrate the diverse culture of our city.
In 2016, we have collaborated with UNA-USA, City of Houston , HISD and many other organizations in support of the Be the Peace - be the Hope project by presenting a workshop and and a presentation for arts in TCC.  We also provide our facility for city's immigrant office to host the CM's  October steering committee meeting.
Be the Peace - Be the Hope
An Afternoon of Fun, Art, and Humanity

On September 24, 2016, the Taiwanese Community Center hosted an afternoon of fun, art, and humanity for our children (ages 2 to 16) as part of the “Be the Peace – Be the Hope” Educational and Healing Arts program.  This project is founded by the Texan French Alliance for the Arts and led and supported by a collective of prominent Houston and international organizations including the Taiwanese Heritage Society of Houston.  The program aims to connect children from Houston and those from refugee camps in Burkina Faso in an effort to spread hope and encouragement. ​

The afternoon kicked off with a video presentation and group discussion led by two student volunteers, Eisha Khan and Naiyoli Palomo, from the University of Houston.  The children marveled at the beauty of Africa while at the same time gasped at the desperate conditions within the refugee camps.  They were next asked to write down on paper where they and their families came from and explain how connection to their heritage supports the hopes and plans they have for the future.  This simple exercise further helped our children understand how difficult it must be for the refugee children to be uprooted from their home and separated from their family without expectations for a safe return.  Even the youngest of the children recognized the stark contrast between the tremendous opportunities that they themselves were blessed with and the lack of even the most basic life support that the refugee children were presented with.  Fueled by the priceless eternal optimism that is so distinct in youths, they were eager to do something to bring about change.​

After a brief rest with refreshment, our Cultural Director, Yuru Huang, an accomplished artist herself, led the children in creating art on 12” x 14” canvases.  From the care free Kankinsky-like abstract interpretation by two-year-old Annika to the sophisticated presentation of surrealism titled “Life and Death” by Tyrone, the children’s creations impressed us all.  Many painted rainbows and doves as symbols of peace.  Other incorporated the White House into her artwork as a plea to our country’s leadership to be part of the solution to this global issue.  By the end of the afternoon, we contributed thirty five canvases of beautiful art to the “Be the Peace - Be the Hope” project.  Our children’s creative expression not only demonstrated thoughts and attention that were mature beyond their years but also embodied the spirit of hope, peace, and mutual concern.  This is exactly the message the program intended to deliver through the powerful medium of art created by children for children. ​

These canvases will be combined with those created by children from other communities in Houston to construct an art installation that will beautify tents in the refugee camps.  This effort will also be mirrored in prominent locations around Houston by showcasing a tent replica along with a traveling exhibition documenting the entire process.  These displays may be seen in various locations, including Houston Public Libraries, Harris County Library, participating schools, and the tunnel at Houston City Hall.  They will offer glimpses of the entire program through photographs, video footage, and personal art pieces created by children.
​​All of us, young and old, came away from this meaningful afternoon feeling enlightened and connected.  We would like to especially thank Yuru Huang for introducing the children to this rare opportunity and for sharing her talent as an art educator.  Until next time, “Let us be the change we wish to see in the world.” – Mahatma Gandhi. ​

The Dreams of Our Butterflies 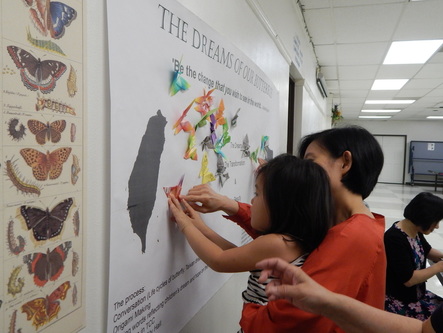 ​The Dreams of Our Butterflies is a project that engages children’s origami making and writing in the process of art creation in public space. The workshop in Taiwanese Community Center is conducted by Yu-Ru Huang in partner with the City of Houston Citizenship Month art committee. The participants are children attending the Houston Taiwanese School of Languages and Culture. A portion of the origami butterflies created by the workshop will become part of the Butterfly Project’s Installation in Houston City Hall Annex.  The month long display of art installation is one of the citywide events that celebrate the diversity of our city.

​The processes:
1. Creating a wall space for children’s interaction Conversation with children (Life cycle of butterfly, transformation and dreams of immigrants families).
2. Origami making with children.
3. Children writing words reflecting their dream and hope onto the wings of the butterfly.
4. Allow children to tag their butter onto their choice of location in their group creation.
​5. Installation in City Hall​.